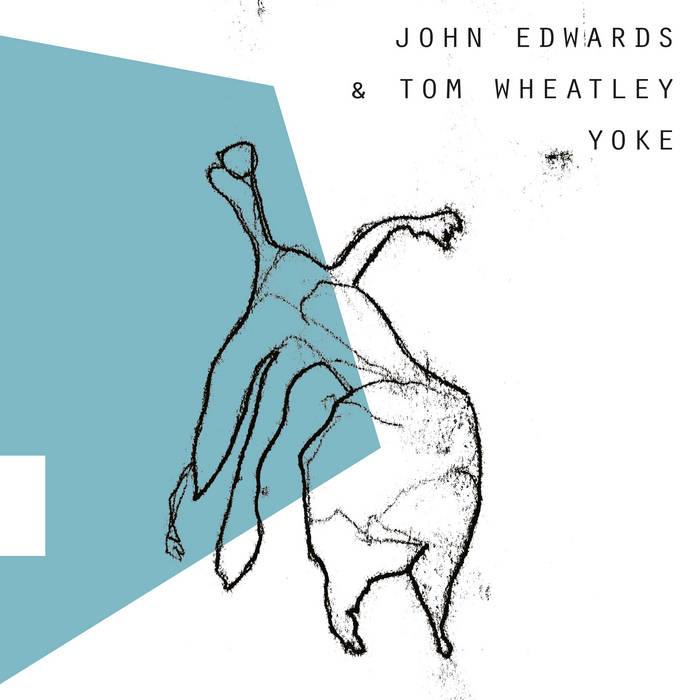 This recording documents the first time meeting between two great double bass players, Tom Wheatley and John Edwards.
Recorded at the Hundred Years Gallery on 22.02.14 as part of the ongoing Earshots concert series.

Bass duo, recorded live in London. Wheatley is a young guy I don't know, Edwards is... well, John Edwards. I'm a sucker for unadorned bass sounds, and this pairing is mighty. Apart from double bass spanking, the music comes from string-wrestling, and burrows as deep and dark as you could ask.

"...a shower of meteorites cascading through the atmosphere"
by Paul Margree / WE NEED NO SWORDS

Is it me, or do Daniel Kordik and Edward Lucas, who run improv tape label Earshots, seem to have a thing about double basses? Their debut tape was a rollicking solo set from Guillaume Viltard who plucked and arco’d his bass like an army of players – a Glenn Branca for the double bass perhaps – and now, for the third release we have not one but two double basses for your listening pleasure.

It helps that one of the basses is handled by John Edwards, a hero of the London free improv scene, who has, among his many duties provided a swinging engine room for Peter Brötzmann as he has breezed through town, more often than not with his partner in crime Steve Noble. Tom Wheatley has a slightly shorter CV, what with him being a bit younger and all, but he’s notched up some pretty impressive dates too, including with saxophone iconoclast Seymour Wright and Daniel Blumberg’s Hebronix..

Yoke chronicles their initial meeting, at east London’s Hundred Years Gallery last February. It’s tough and frantic, but dynamic too, with lots for connoisseurs to get their teeth into. The sound circles from dizzyingly terrifying bowing, through to an immense, almost industrial groan – kind of like drunken battleships attempting a late night kick-about in the street long after the pubs have shut – to hazy, delicate melodic figures that poke out from the murk, ferns gradually unfurling in the spring dawn.

The opening sequence certainly heads out into abrasive territory, both players digging in and getting down. An early salvo of wild arco’ing and pugilistic extended technique comes on like a saloon brawl on the old Wild West, its solidity given an extra layer of grease by the cassette’s inherent low fidelity.

This whole section has me thinking that the duo has peaked early, but they pull things back soon after, with some beautiful, almost jazzy plucking that’s reminiscent of Charlie Hayden at his most hip. It’s short, but effective, at first minimal before splitting into a hail of notes and clatter. Just after this, one bass plays a dogged, almost-but-not-quite the same refrain as the other wheedles and whines behind.

But it’s on side B that things really hot up. At times it seems like there are three basses playing, not two – one bowing high, another whirling around on the high register like Ornette at his most unhinged (on violin, not horn, natch) and then a third exploding into dissonance all around it. In fact the whole of this side bristles with unrestrained vigour, a shower of meteorites cascading through the atmosphere.

Recorded in February 2014, Yoke may be almost archival in free improv terms, but it’s a doozy, The duo don’t let any opportunities for exploring the full sonic capabilities of their instruments go to waste and this glorious cacophony is the result. Enjoy with extreme volume.
weneednoswords.wordpress.com/2015/07/14/john-edwards-tom-wheatley-yoke/